When news broke that the NFL was lifting the one-shell rule, I had mixed feelings. On the one hand, I was glad that retro favorites like Pat Patriot and Bucco Bruce would be returning to the field. On the other hand, I felt like the one-shell rule had inadvertently been a valuable bulwark against the likely worst instincts of Nike, the league, and the teams, preventing them from flooding the scene with ridiculous alternate designs. So as I said several times as people celebrated the rule’s repeal, “Be careful what you wish for — we may find ourselves longing for the return of the one-shell days.”

To a certain extent, my fears have been borne out. While some of the new alternate helmets are commendable (I like the Bengals in white and the Panthers in black), many of them fall far short of that mark (Eagles, Jets, Saints, Bears). For a lot of them, you can almost hear the marketing meeting where someone said, “Well, we’re allowed to do this now, so we may as well do something.”

But I’m not writing this piece to say I told you so. On the contrary, there are two things about these new helmets that I find very surprising and definitely didn’t anticipate:

That’s not how I thought this would play out. When I said, “Be careful what you wish for,” I was envisioning a situation closer to what we see in the NCAA, where teams trot out helmets with alternate logos and pair them with new costume-like uniforms. For example, I’m very surprised that the Bears’ new orange helmet has their standard wishbone-“C” logo instead of, say, their alternate bear’s head logo. Similarly, I’m a little surprised the Texans or Saints or someone didn’t come up with a new alternate uni to go with the helmet design. Or to put it another way, while many of these new helmets are unnecessary, the overall approach is still much more conservative than the full-on Nike-fication I expected.

There are several possible reasons for this:

Anyway: The point I’m trying to make here is that while this new wave of helmets isn’t great, it’s not as bad as I feared it would be — or as bad as things could get as we move forward.

Practically Giving Them Away 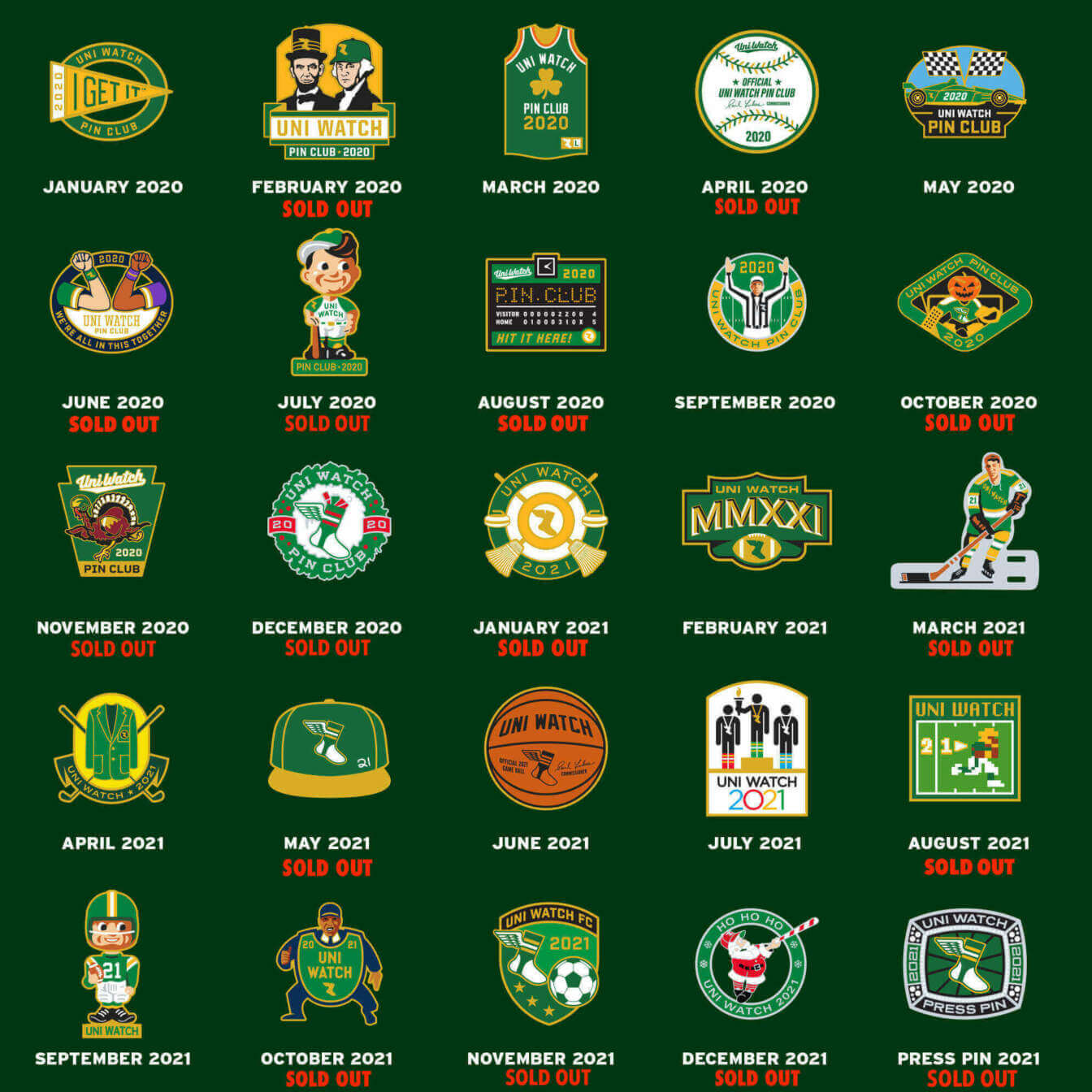 Five more pin designs sold out yesterday. In case you missed it, the pricing is now at a rock-bottom $1 apiece, plus you get one free pin for every three you order. So that’s four pins for $3, eight for $6, and so on. Full details here.

Today’s Ticker is available here, and “Collector’s Corner” will be published this afternoon. — Paul