It is now available GBWhatsApp v13.40 downloadan update that includes an exclusive system for know who has blocked us on WhatsAppa new context menu with useful tools and better antiban.

The popular GBWhatsApp is part of the whatsapp mods, that is, versions created by enthusiasts of the application that add many functions not present in the original. In this case, they solve a very common request from users, because when they block us from WhatsApp we don’t see any clear confirmation.

It is possible to find the novelty in the drop-down menu of the home screen (any tab) under the name of “Know Who Blocked You?” (Know who has blocked you?), as in the following screenshot:

It’s GBWhatsApp’s own system, so we don’t know to what extent it’s reliable, or if WhatsApp can consider that it violates users’ privacy, but it’s worth trying at least if we want to know if someone has blocked us.

Also, added a context menu with many options when tapping on a messagebetween them translate whatsapp messagescopy links (URLs) from the entire conversation or modify the text of that message: 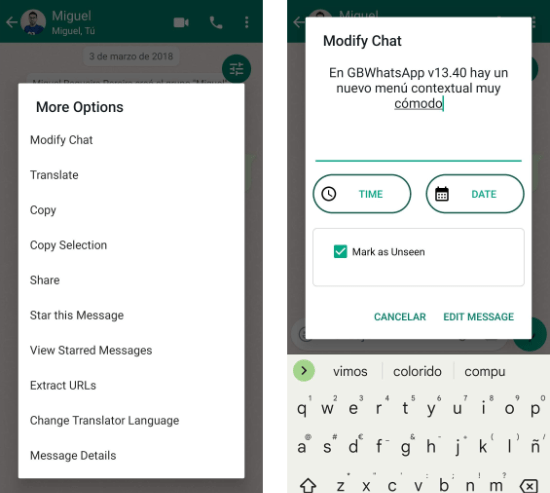 The option to modify messages it only changes in text on our own mobile, it does not affect what other users see, which will be the message as it was originally sent. Therefore, its usefulness is limited, at most it will serve to falsify screenshots, something that other apps already do.

Finally it has improved antiban system, which ensures that WhatsApp developers do not detect that we use an unofficial version. given the last warnings to WhatsApp Plus and GBWhatsApp On the part of the company, this novelty is not over.

Officially, WhatsApp does not allow you to connect with mods, and can even suspend accounts for breaking this rule. It’s been lax for years, but it recently detected malware in one of the mods on whatsapp plusand it is feared that he will change his attitude in the future.

The current tricks for know if we have been blocked on WhatsApp are inconclusive, so worth trying GBWhatsApp v13.40 to take advantage of its extra features, which make it increasingly complete.